Chris Brown fans keep your ears on the ground and your eyes on your television screens. Vuzu Entertainment have revealed that they are going to be broadcasting a special Chris Brown announcement tomorrow. "Oh goodness", we thought when we first saw this. First and foremost, we really hope that the announcement isn’t about him cancelling the concert due to the club shooting incident this past weekend. Just in case you missed the story; five individuals were injured in a San Jose club, where Chris Brown was performing.

See how terrified he looked in this video when it dawned on him that the popping sounds at the club were actually gunshots.

Maybe the club incident, intimidated Brown so much that he's re-considering his upcoming "Rumble in the jungle". The singer is scheduled to touchdown in Mzansi in April and he'll be performing in Johannesburg and Durban.

That's just us speculating. Like you, we're not sure of what the announcement might be but hey, it could also be positive. Maybe the good guys at Vuzu are going to announce a drop in ticket prices (we clearly remember the outcry by many of his fans after the ticket prices were revealed). Maybe they are adding a third date. Maybe they are shooting a reality TV show with Chris while he's here. Or maybe, and I know I'm reaching here, but maybe Chris Brown is moving to South Africa and he's going to become a Vuzu presenter. I can see it now: screaming girls outside the Vuzu studios on a daily basis, a rise in American accents in South African schools and lots of "Dance challenges".

Okay, that last one is probably unrealistic, but until the announcement is made, we can only speculate right? Maybe Chris wants to give a couple of his fans that true Breezy experience by taking them backstage for a one on one session with him.

Catch the special announcement on the 14 of January at 18:00pm 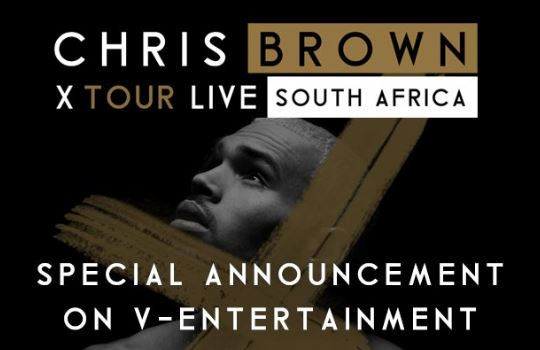